Rabbis to EU Delegation: Supporting Palestinians a Recipe for Catastrophe
The Jewish Press May 23, 2012

A senior delegation of the Rabbinical Congress for Peace (RCP) met on Tuesday with Ambassador Andrew Standley, the Head of the European Union in Israel to present the Torah view on the issue of giving up land to the Arabs.

The rabbis made it clear that the majority of rabbis in Israel and abroad are of the opinion that is absolutely forbidden to give up an inch of land to the Arabs based on the clear Halacha in the Jewish Code of Law Chapter 329, that the sanctity of life overrides all other considerations and giving up land has proven more than once that it leads to violence, bloodshed and instability. “As rabbis we are committed to peace and promote peace, but a true and lasting peace not one that will blow up in our faces before the ink often agreement has a chance to dry,” they told the ambassador.

Rabbi Joseph Gerlitzky, the rabbi of Central Tel Aviv and Chairman of the RCP said that although Jews are obligated to observe the Torah precepts even if we don’t understand their meaning, the above ruling is understood by everyone. Even a young child understands that retreating from land leads to terrorism, bloodshed and missiles.

Rabbi Avrohom Shmuel Lewin, Director-General of the RCP, asked the ambassador how long the EU would continue in this exercise in futility of supporting a “territory for peace” formula, which has proven time and time again that it is really “territory for terror.”

“The EU is urging Israel to withdraw to the 1967 borders. We did that in Gaza and what did we get? 10,000 missiles. Do you want that to happen in Judea and Samaria too?” Rabbi Lewin asked.

Rabbi Moshe Havlin, Chief Rabbi of Kiryat Gat and Sderot related how his own life and the lives of his family members, children, and grandchildren have been disrupted, and how they live in constant fear of being attacked by missiles from Gaza.

Rabbi Shlomo Rosenfeld, the Rabbi of Shadmot Mehula in the Jordan Valley emphasized that it is precisely the organization that represents the European countries (the EU) where the Holocaust took place that must feel the responsibility for a secure Israel. “What is happening today in Israel is an extension of the Holocaust. The Jewish people are again being made a scapegoat for the lack of world peace while the Palestinian terrorists and murderers are depicted as innocent peace seekers. I want to state in no uncertain terms that the EU’s one sided support of the Palestinian demands is an extension of the Holocaust,” he said.

Rabbi Abraham Shreiber, the rabbi of the fomer Kfar Darom in Gush Katif related that before the disengagement from Gaza local Gaza residents and their Jewish neighbors lived in peace and harmony. The vegetables and crops grown in Gush Katif were the best in the country and the Arabs learned how grow them too. “We still get calls today from many former Arab neighbors complaining that situation has become much worse for the Arabs themselves as a result of the disengagement. They are pleading with us to come back,” he said.

Rabbi Jacob Shapiro, the dean of Yeshivat Mercaz Harav in Jerusalem, disclosed that the night that terrorists attacked the yeshiva several years ago, killing eight students, he received an anonymous call from a caller who told him: “we attacked you because you believe in the Bible that says that Israel belongs to the Jews.” “Our Bible is not only a history of the past but a blueprint for the future,” Rabbi Shapiro told Mr. Standley.

Ambassador Standley listened attentively to the rabbis and thanked them for coming to present the Torah view. He said that it is hard to argue with the rabbis since they live in Israel and feel the heat on a daily basis while he is only here for a few years and then will move on to another country. However, the ambassador said that he understands that the Jewish people are bound by the Torah, which is eternal, but he and the EU is bound by international law which has not yet accepted laws of the Torah. He added that he is always open and ready to listen to diverse views and will bring the RCP’s message to those that guide policy at the EU.

Rabbi Gerlitzky wished the ambassador much success and that God Almighty should give the EU the strength and power to end their policy of demanding Israel’s withdrawal; he added that the EU should oppose any Israeli withdrawal and support Israel’s inalienable right to live and build in every part of the Holy Land. “This is the only formula that will bring true and lasting peace to the region as delineated in the Torah ‘I will provide peace in the Land.’” 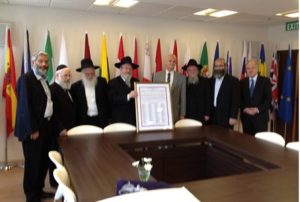