TEL AVIV – The Rabbinical Congress for Peace- “Pikuach Nefesh,” composed of 400 Israeli rabbis, is currently issuing a proclamation to Knesset Members, under the heading, “Did I not tell you, sin not against the boy? Now we must account for his blood” (based on Genesis 42:22).

These days, when Israel’s finest military and political experts, from both sides of the political spectrum, are struggling to answer the question, “What do we do with Gaza,” when we again see Hamas shedding Jewish blood and undermining its security with each rounds of attacks, leaving Israel no truly effective response to annul the threat, it is our obligation to declare, once again, that the sole cause of this terrible situation is the Israeli government’s disregard for the Torah’s prediction that any withdrawal from Israeli lands will ultimately lead to death and bloodshed. (See Shulchan Aruch, O.C. 329).

We have repeatedly warned, on every possible occasion and through every available means, prior to both the Oslo Accords and the tragic disengagement from Gaza, that the result would be a situation of danger and helplessness, which Israel cannot overcome. But Rabin and Peres, as well as Sharon and his followers, disregarded our warnings and arrogantly boasted that in the event of a threat, “We will eliminate them in an hour.”

“We are not smarter than God,” members of the Rabbinical Congress have said. “Despite the IDF’s military superiority and sophisticated technology, it is impossible to fully eliminate the threat from Gaza, after the IDF has withdrawn its forces from there. Our present situation is the direct result of the disengagement, exactly as the Torah of Israel – the “Torah of Life” – has warned, as codified in halacha.”

Today, as well, we unequivocally declare – there will never be a solution to the Gaza crisis until the Israeli government corrects the root of the problem and admits that the Oslo Accords and the disengagement from Gaza were terrible mistakes, that there will be no more withdrawals, concessions or building freezes, no discussion of a “two state” solution and no further negotiations. All pressure and acts of terrorism by our enemies will be answered with a significant military response. Only in this way, in accordance with Jewish law, can the security for the people of Israel in the Holy Land be restored, and the verse fulfilled “I will give peace to the land, and you shall lie down, and none shall make you afraid” (Lev. 26:6) 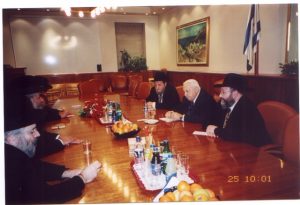