The leaders of the Rabbinical Congress for Peace, which consists of over 400 leading Israeli rabbis, who fight continually for recognition of Israeli sovereignty over the Holy Land, is sending the following special request to all rabbis throughout Israel, that they lead immediate prayers for the speedy recovery of the United States President: Donald John ben Fred.

“Never has there been an American president like Mr. Donald Trump,” write the Congress’s rabbis, “who is a true friend and supporter of the Jewish people and fights for the Land of Israel. It is our obligation to pray for his health and full and speedy recovery. May he quickly regain his strength and continue his noble acts of kindness throughout the world, and especially, on behalf of Israel.”

The rabbis also sent an urgent message to President Trump’s son-in-law, Mr. Jared Kushner, who, as a practicing Jew, knows that by fulfilling G-d’s will, he will draw down blessing to aid in the recovery of the President. “It is clear to us that in order to bring about the speedy recovery of President Trump, the following proclamation should immediately be made: that the very idea of establishing a Palestinian state in the Holy Land is unacceptable and will be removed from the international agenda. The United States of America recognizes only one sovereign state in the Holy Land, and that is of the Jewish people. This follows G-d’s promise in the Covenant of the Parts (Genesis 15),that the Land of Israel was promised by G-d as the eternal possession of the children of Abraham, Isaac and Jacob.

“President Trump has made great strides in establishing this truth on the ground, and may he continue his historical efforts toward full recognition of Israel’s inalienable rights to the entirety of the Land of Israel. In the merit of this, may he enjoy long years of health and satisfaction, together with his entire family. 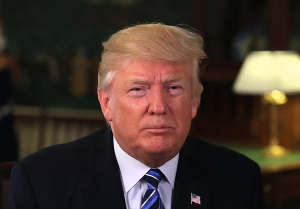