Hundreds of Rabbis declare: “The Deal of the Century is not worth the risk”
The Rabbinical Congress for Peace (RCP) composed of over four hundred Israeli rabbis, unequivocally rejects President Trump’s “Deal of the Century.” The rabbis have emphatically stated that Jewish Law prohibits any declaration of territorial concession, whether now or in the future, even when accompanied by strict conditions and restrictions, and that such concessions create a dangerous on-the-ground situations, and stand in direct contradiction to halakha (Jewish Law). The rabbis further expressed their shock at the Israeli government’s agreement to the establishment of a future Palestinian state, with east Jerusalem as its capital, as it was declared. “No one knows what will happen four years from now in the Middle East. However, one thing will be remembered: that Israel already stated that in principle, East Jerusalem will be the capital of the Palestinian state,” the rabbinical statement said.
At a special meeting held this morning, the rabbis of the Congress announced: “Jewish Law, in the Shulchan Aruch (§329) determines that if foreigners enter the Land even on “business related to straw,” that is, not to incite violence, disarmed of their weapons and recognizing the Jewish state— exactly as specified in the Deal of the Century—Jews are nonetheless obligated to wage war against them, even on the Shabbat, so that no Jewish territories will be seceded to them. This is even truer when the enemy has not yet fulfilled the conditions. Then it is forbidden to make such promises, which will only reinforce their commitment to harming the country and its inhabitants. Even more infuriating is the fact that Israel agreed to these concessions, including the immediately suspension of building in flourishing Jewish communities, before the Palestinians accepted to a single clause;
Of course, the rabbis of the RCP thank President Trump for his sympathetic and unprecedented treatment of the Jewish people and the Land of Israel. There is no question that his intentions are pure. Our claims are against the Prime Minister and the weak Israeli leadership, who, instead of taking advantage of this rare and amazingly period in history, graced by heaven’s compassion, run joyfully forward to announce their agreement, in principle, with the formation of a Palestinian state and to territorial concessions, the outcome of which no one can yet imagine.
“Why all the celebration? What exactly did we achieve?” Rabbi Shmuel Eliyahu, Rabbi of Safed, asked. “They managed to completely confuse the nation. The only one who is really celebrating is Abu Mazen. He got what he wanted and will continue to demand more and more. The establishment of a Palestinian state is worse than the disengagement from Gush Katif.”
Congress Chairman, Rabbi Joseph Gerlitzky, Rabbi of Central Tel Aviv, said at the gathering that, based on past experience, any declarations of future Israeli concessions automatically becomes the starting point for further negotiations. “There is no question that from the perspective of the international community, and certainly, from the perspective of the Arab states, the maps presented by Trump and the establishment of a Palestinian state are already accepted facts. Israel declared them itself. Palestinian demands will be even greater in the future, and will undoubtedly be accompanied by a wave of terror, G-d forbid.
“We seem to be repeating the same mistake as Oslo,” commented Rabbi Abraham Shmuel Lewin, General-Secretary of the Rabbinical Congress. “The PLO was then in a state of total collapse, and Israel revitalized them. Today, as well, the Palestinian Authority—Israel’s bitter enemy—is also in a state of collapse and are ignored by the entire world, including the other Arab nations. Yet now, has Israel not only returned them to center-stage, they have promised them a state! Sovereignty is worth nothing if it requires us to secede from areas under Israeli control and to endanger the entire country. There is no question that any territories that lack a full Israeli presence immediately become a haven for terrorists.”
Rabbi Abraham Schreiber, rabbi of the Gush Katif community, announced that his community would oppose the Trump plan: “Any plan that entails a weakening of Israel’s position lead inexorably to further concessions and renewed threats. This is the beginning of a destruction whose end we cannot foresee.” Rabbi Schreiber added that the strange “euphoria” and “messianic atmosphere” that the Prime Minister is trying to create is only a smokescreen that is hiding much greater concessions, which have not yet been revealed to the public.
Rabbi Elyakim Levanon, regional rabbi of Samaria and the rabbi of the Elon Moreh Community, commented on the meeting: “We thank President Trump for his wonderful friendship with the people of Israel. We can now declare Jewish sovereignty over the entire Land of Israel, without the need to make dangerous concessions and foolish declarations. However, we, the members of the Rabbinical Congress will fight tooth and nail against the “Deal of the Century,” and have only one declaration to make, which will certainly receive President Trumps backing, if it is stated clearly and unequivocally: There will never be a Palestinian state, and Israel will never withdraw from any territory that is part of the Holy Land 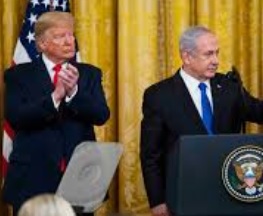