Israeli Rabbis welcome Hamas call to tear up the Oslo accords saying “Israel should have done that a long time ago”
TEL AVIV- The Rabbinical Congress for Peace (RCP) has welcomed Hamas’s call to PA Chairman Abu Mazen to cancel the Oslo agreement and said “Israel can recite the blessing “Baruch Shepatrani” (“Blessed are you G-d who has freed us from this punishment). The disastrous Oslo accords never brought peace closer rather it caused thousands of deaths and casualties, increased tension and instability in the region pushing peace even further away.
Rabbi Sholom Gold a prominent Rabbi in Har Nof and leading member of the RCP said “We rabbis were the first ones to alarm and begged to tear up the Oslo accords before it would be too late and to condemn those who initiated them. It is high time that Israeli leaders internalize this and stop talking about a two state solution, it will never work and will prove to be more dangerous than the Oslo accords.
“The whole world sees that going against G-d’s will of giving away that which He has given to the Jewish People will never work. Only by taking a strong stand in defense of the integrity of Eretz Israel can we insure a true and durable peace in the region,” said Rabbi Gold
In the past the RCP has launched various public advertisement campaigns in the mass media publicizing then Halachic Ruling based on the Jewish Code of Law in Orach Chaim Chapter 329 which forbids the surrender of territory under Jewish control to foreigners on the grounds that this would lead to bloodshed and loss of lives. This ruling was signed by 400 rabbis from all over Israel. 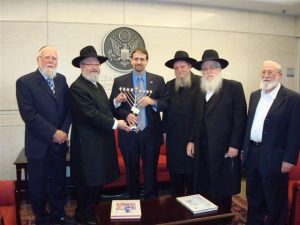