Mike Huckabee tells rabbis “the two state solution is a diplomatic fantasy, a waste of time and money.”

JERUSALEM – A delegation of the Rabbinical Congress for Peace(RCP) met with former Arkansas governor Mike Huckabee in Jerusalem to thank him for his strong and unwavering support of the Land of Israel, the settlement movement and for his strong opposition to the so-called two-state solution and discussed what the future holds for the new relationship between Israel and the incoming Trump administration.
Rabbi Joseph Gerlitzky, Chairman of the RCP presented Mr. Huckabee the Halachic Ruling signed by 400 prominent rabbis of Israel forbidding the surrender of land to the Arabs based on an explicit ruling in the Jewish Code of Law Orach Chaim Chapter 329 “because it will lead to bloodshed, instability in the region and loss of life”.
Gov. Huckabee emphasized that it is important to get the message across to the world that Israel is a very special place. G-d’s hand is upon it and we must be mindful, respectful and never be bashful about saying to the world that G-d’s hand is upon Israel. No one in Israel should ever be afraid to boldly proclaim that the foundation of this country is not its politics but its faith. Without its faith it would not stand, with its faith no one can ever stand against her.
“The idea of a two state solution is a diplomatic fantasy and it’s never going to happen and we need to stop talking about it because all it has done is waste time and money of diplomats who have traveled all over the Middle East and beyond trying to pretend that they were doing something that they are not doing. We have to abandon this policy.”
Mr. Huckabee said that he was surprised to hear that there are Israeli officials who think that the two-state solution is in Israel’s interest when “in fact it’s absurd and irrational nonsense. It will only increase instability in the region. There are 57 Muslim nations in the world that occupy 100,000 times the land mass that Israel does which is a tiny piece of land the size of NJ. If you want a two-state solution find some Arab Muslim country that would want to welcome the Palestinians.”
Gov. Huckabee promised the rabbis that he will do everything to make sure that the new Trump administration will follow up on all its promises pertaining to Israel and its undivided capital Jerusalem.
Towards the end Huckabee quipped “It is indeed a miracle to see that 400 rabbis all agreed to sign on one Torah verdict. The rabbis responded that this is a clear ruling in the Jewish Code of Law that no one contests namely that “the sanctity of life supersedes everything and therefore Israel dare not give up an inch of land to enemies bent on its destruction.”
Also participating in the meeting were Rabbi Avrohom Shmuel Lewin, Executive Dir. Of the RCP, Rabbi Sholom Gold, a leading rabbi in Har Nof and Rabbi Yaakov Shapira, the head of Yeshiva Mercaz Harav. 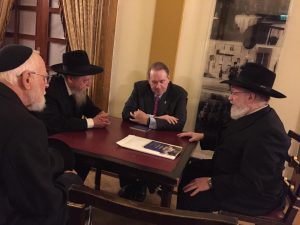 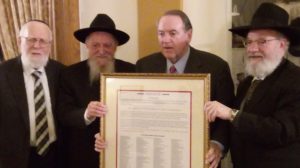 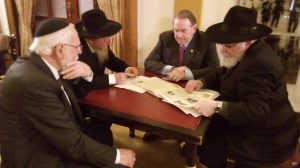 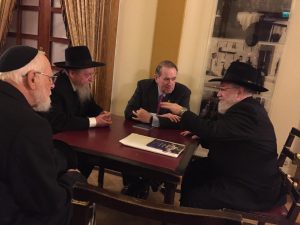