TEL AVIV – Large ads appeared in Israeli English-language newspapers this morning in which prominent Israeli Rabbis petitioned US President Donald Trump to avoid falling prey to the mistakes of previous US administrations. The ad, sponsored by the Rabbinical Congress for Peace, reminded the President that every earlier attempt to negotiate an Arab-Israeli peace agreement based on the principle of “land for peace” not only failed, but led to further bloodshed and increased terror attacks.

Four hundred leading Israeli Rabbis lent their signature to the document, which is based on solid foundations in Jewish jurisprudence (Shulchan Aruch, Orach Chaim §329), which prohibit the transference of Jewish controlled land to our enemies, inasmuch as it puts the entire nation in imminent physical danger.

“We are convinced of the sincerity of the President’s intentions,” stated Rabbi Joseph Garlitzky, Rabbi of Central Tel Aviv and Chairman of the Rabbinical Congress for Peace. “And precisely because of that, it is critical to remind him, through whatever means possible, of the great folly inherent in the idea of ‘two nations for two peoples,’ and any similar assumptions that believe that making territorial concessions to the Arabs will bring peace. The Torah of Israel long ago determined that making any concessions will only lead to bloodshed, G-d forbid – a sad fact that is obvious to anyone who looks at the situation objectively.”

The Rabbis who signed the declaration call upon President Trump to strongly affirm the approach of Jewish Law, which rules that only by ceasing all negotiations over the transference of Jewish land will a true peace and lasting security be attained in our land. 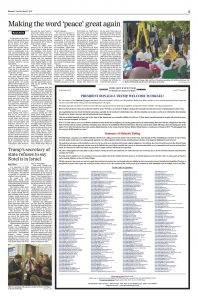