Ever since Barack Obama was sworn in as president of the United States he has been recognized in Israel as a superstar.

To the Israeli media and policy makers every word of his shakes heaven and earth. He is perceived as an omnipotent force and therefore it deters the government from making decisions on building, populating and improving the infrastructure in Jerusalem. It also fears to implement decisions that were already approved by previous left-wing governments. At the same time the authorities are afraid to impose the law against illegal Arab construction that threatens the future of Jerusalem. The Arabs smell this weakness and this emboldens and encourages them to harden their positions towards Israel.

However, there is no basis for this fear and overreaction. With all due respect to President Obama he is not that powerful. The polls in recent weeks point to a drastic decline in his popularity in the United States. Support for the Democrats in the Senate and Congress is now at an all time low and the Republican legislators are now perceived more worthy of being elected to Congress. Two thirds of the population feels that America is not heading in the right direction.

As the Congressional campaign goes into motion this month and the rate of unemployment continues to rise, the president becomes more and more contingent on Congress. During an election campaign Democratic legislators are attuned to their constituency more than they are to the president. The relative weight of Congress rises during economic crises and the assertiveness and independence of legislators grow as congressional campaign season approaches.

Polls in the US show that there is still strong and unwavering support among the American public for Israel. Democratic legislators are aware of this and therefore will not allow the president to break Israel’s back by imposing withdrawals from land vital to its security.

True leadership understands that saying no and standing up against pressure is vital to attain strategic goals while surrender and acquiescence only leads to abandonment of these goals. At the same time it increases international pressure on Israel. Fending off pressure requires you to alter your tactics but not your goal.

My father, former PM Yitzchak Shamir, may he live and be well, knew that defying American pressure would harm his personal popularity and Israel’s image in the short run but in the long run would turn Israel into the US strongest ally and strategic partner.

World has changed in Israel’s favor

Nothing illustrates this better than Defense Minister Ehud Barak’s words in his dedication to the book “Yitzchak Shamir: Firm as A Rock” published last year:

“During President George Bush’s (the father) term in office while I was serving as the IDF’s chief of staff I was once summoned to the Prime Minister’s Office to meet with then US Secretary of State James Baker who had been demanding that Israel make far-reaching concessions. Upon the request of Shamir, I briefed our prominent guest with the range of military threats that is facing Israel. Baker did not retract from his demands. Instead, carrying the weight of the only superpower leading the free world today, he insisted that Israel concede.

“At one point I noticed Shamir’s face became very tense and alert, it looked like a volcano about to explode. He banged on the table and told the secretary of state in a very blunt and undiplomatic manner, in a very sharp but self-controlled tone: ‘Mr. Secretary, you can demand what you choose to demand but this is our country and we will not agree to do anything that will harm its interests and future even if our best friend demands it from us.”

My father’s refusal to budge from his principles did not lead to a round of applause and praise in the media but it elicited respect for the man and improved Israel’s national security. His heritage now forewarns Israeli prime ministers to stand up to pressure and not to define American pressure as a reason to withdraw from your vision and strategic goal. This will only erode Israel’s power of deterrence and that of the US in the Middle East.

I’m sure there will be those who will claim that one cannot compare the situation prevailing then to the situation today. They will claim that times have changed, the world has changed and all kinds of baseless reasons aimed at frightening the Israeli public so they would succumb to a strategic withdrawal. True, the world has changed, but in Israel’s favor. Israel has been upgraded dramatically in the military, economic, demographic, technological and medical fields etc.

The US post September 11th and Europe following a wave of Muslim terror and being faced with a demographic Muslim time bomb constitutes a plausible arena for Israel to stand firm and unapologetic.

The US Congress is equal in power and independence to the president. The president initiates and executes policy but Congress controls the American Purse. It has the authority to change, suspend and initiate policy. Congress has always displayed a more hawkish approach than Israeli governments when it came to the security of the state and especially on the issue of Jerusalem.

Very prominent and influential congressional figures have made it clear that we now have a historic opportunity to upgrade the Israeli-US strategic partnership regardless of the present disagreements with the Obama government regarding the Arab-Israeli conflict.

The present Israeli government has a solid majority and backing of the Israeli public who is hoping for change – it wants to see a strong Israel that stands by its rights and principles and does not succumb to the pressure of international elements that have only their self-interests in mind. 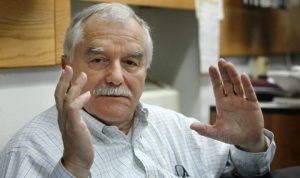