The Rabbinical Congress for Peace accuses the Bennet “government of surrender” as the cause of the recent spate of terror attacks
The Rabbinical Congress for Peace (RCP), consisting of some four hundred of leading Israel rabbis, including chief rabbinical court justices, municipal rabbis, and rabbis of neighborhoods and settlements, warns that the danger of terrorist attacks and bloodshed is on the rise, especially after the horrific attacks of the past few days. “The reason for the increase in terrorism is not ‘preparation for Ramadan,’ nor ‘feelings of discrimination’ and the other false statements made by the police and the government; rather, the reason for the increased terrorism is the very attitude behind these statements. When the government and police bow their heads and demonstrate weakness, they only strengthen the hand of terrorists and the murder of Jews, may G-d Almighty protect us.
“When the first response of the Chief of Police after an attack is, ‘There is nothing to be done, you can’t put police officers everywhere,’ this is a security and moral evasiveness. All the responses of the government and the police transmit defeat and surrender, which only encourages the terrorists further,” says Rabbi Yosef Gerlitzky, Chairman of the RCP and Rabbi of Central Tel Aviv.
The rabbis repeatedly warn that every day that the Bennett-Lapid-Abbas government remains in power, the risks to the entire Land of Israel increase. “This government deals exclusively with the evacuation of outposts, strengthens and conducts negotiations with Abu Mazen, abuses the Jewish residents of Judea and Samaria, against whom terrorists throw dozens of Molotov cocktails and stones on a daily basis, endanger the lives of Jerusalem residents, and distribute billions of shekels to the enemies of Israel. This is the embodiment of the warning of halacha (Jewish Law) in the Jewish Code of Law (Orach Chaim Chapter 329), that any concession and surrender to the enemy leads to a even greater danger,” says Rabbi Avraham S. Lewin, RCP General Director. “This warning has been proven to be true again and again.”
“We call on anyone who still has a shred of Jewish conscience in this coalition to vote against this dangerous government, and do everything in their power to establish a government that will follow the Torah, which is the path of true security for the people of Israel,” the RCP concludes. 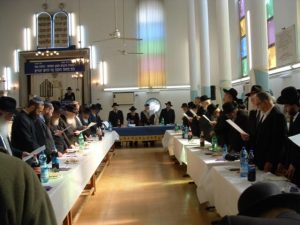