The Rabbinical Congress for Peace declares: Sovereignty has become the new excuse for tearing apart the Holy Land
The Rabbinical Congress for Peace comprised of over 400 leading Israeli rabbis, have completed their appraisal of the current plan to annex Jewish settlements in the Land of Israel – proudly presented by Prime Minister Netanyahu as part of the “Deal of the Century.” In response, the Counsel has decided to embark upon a widespread public campaign to inform the Israeli public of the plan’s shortcomings and dangers.
“We give our ready blessing to any plan that seeks to establish Jewish sovereignty over the Land of Israel, which were promised us in our Holy Torah,” states the Counsel. “However, as long as the plan is based upon the equation “sovereignty over one territory in exchange for renunciation of control over another,” it no longer matters who lives in that area. The loss is much greater than the profit and the danger outweighs the benefits.
“The general public is confused by all of the announcements and maps they are presented with, and fail to see that the plan is a replay of the great mistake of Oslo and the disengagement,” said Rabbi Abraham Shmuel Lewin, secretary of the Congress. “In the final analysis, all these compromises and declarations stand in direct opposition to the eternal truth of the Torah, which is also the simplest and most logical to prove – that any concession of full Israeli control of the land, even if only at the “declarative level,” strengthens the will and ability of our enemies to attain further concessions through acts of terrorism and murder, exactly as happened after the Oslo Accords and the disengagement from Gaza.”
“Israel’s enemies care little as to how we define the settlements. From their perspective, Jaffa and Haifa also belong to them,” said Rabbi Abraham Schreiber, rabbi of the Kfar Darom Congregation in the Negev. “But there is one thing that they do care deeply about – that the Israeli government declares certain territories to no longer part be of Greater Israel. This declaration then becomes the Palestinian’s starting point for future negotiations. In their eyes, this is proof that Israel has already surrendered and agreed to a Palestinian state on seventy percent of Yehuda and Shomron, and that Israeli communities will have to live within it in hopeless enclaves. Why not continue their terrorist activities to attain the rest of their goals?”
Rabbi Yosef Gerlitzky, chairman of Congress and rabbi of Central Tel Aviv, called upon all Israeli rabbis to use their Shavuos sermons to explain to the public the great danger of the government’s steps. “On the festival of the giving of the Torah, every Jew knows that the Torah was given to us in its entirety, and that it would be impossible to accept a mere part of it. Even the children know that a Torah scroll missing a single letter is invalid. In the same way, it is impossible to declare Jewish sovereignty over certain settlements, and in the same breath, to give up other territories to our enemies. This is not the way to protect the Land of Israel or the people of Israel. Only by firmly declaring that we will never surrender territory and never recognize a Palestinian state will we bring security to the Jewish people in the Land of Israel.” 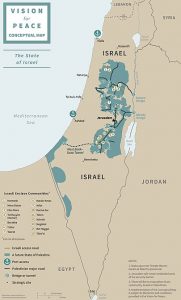