‘Trump peace plan is even worse than Olso and the Disengagement

Rabbinic Congress for Peace warns that Trump plan will commit Israel to Palestinian statehood, even after Trump is gone.

A prominent Israeli religious organization opposed to land concessions to the Palestinian Authority has condemned President Donald Trump’s Middle East peace plan, declaring it worse than the 1993 Oslo Accords signed by then-Prime Minister Yitzhak Rabin, and the 2005 Gaza Disengagement Plan of Ariel Sharon.
Rabbi Yosef Gerlitzky, founder and Chairman of the Rabbinical Congress for Peace, spoke with Arutz Sheva Tuesday about his organization’s opposition to land concessions by Israel in general, and why he is especially concerned about the current US plan.
“We are a non-political organization of 400 rabbis who signed on a halachic ruling that we are not allowed to give away even one inch” of the Land of Israel “for peace, because no peace will come out of this, just war. This is a clear law in the Shulchan Aruch, in the Code of Law, 329,” which states that it is permitted to desecrate the Sabbath to prevent foreign enemies from “conquering part of Eretz Yisrael, because from there, the whole country will be open for them.”
“We saw this by Oslo, we saw this in the Disengagement. I hope we will never see this again.”
“The Land [of Israel is ours] because the Almighty gave it to us. But the Halacha [Jewish law] doesn’t speak only because God gave it to us. It speaks about giving away land which will bring danger to the whole people in Israel.”
What do you say to people who argue that you have to give away some land to save lives?
“There were many people who thought so, and when we came out with the ruling, they said, ‘Here, there’s a few hundred radical rabbis who are against peace’. But today everyone sees that we were 100% right.”
Rabbi Gerlitzky recalled a meeting with representatives from the Congress of Rabbis for Peace with then-Prime Minister Ariel Sharon ahead of the Gaza Disengagement in 2005.
“We came to the Prime Minister two months before the Disengagement” in the summer of 2005.
“What we heard from Prime Minister Sharon, we were arguing with him for an hour and a half – we were supposed to be there for fifteen minutes – and we were arguing and explained, and we saw that we’re speaking to the wall. Simple as that.”
“I received a letter two weeks before the Disengagement, and [Sharon] says that we’re going to have a new Israel now. And he was right. We received a new Israel, with rockets and mortar fire all over Israel thanks to the Disengagement. Meaning there is no such thing as giving land away from Israel and having peace.”
What do you think of the Trump administration’s peace plan?
“Tens of times I read it. Tens of times it says ‘Palestinian state’. Some people say ‘listen, we have Trump with us, everything is fine, don’t worry about it.’ I said, ‘Who is the prophet that tells us that the American President Donald Trump will stay forever? The minute we sign off on a Palestinian state, it’s the beginning of the destruction of the whole of Israel.”
“It is even worse than Oslo and the Disengagement, because this states clearly a Palestinian state, and you don’t know how it will be translated in a year or two or three or four.”
“This is something which we all have to be against.” 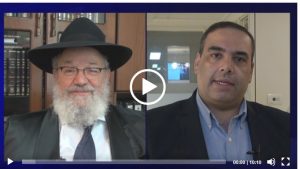