“We must change our approach” – Rabbis of the Rabbinical Congress for Peace (RCP) meet with ambassadors of world powers
———————————————————————————————————–
TEL AVIV – The heads of the Rabbinical Congress for Peace, “Pikuach Nefesh,” which is comprised of over four hundred Israeli Rabbis, continues its ongoing dialogue with ambassadors of world powers stationed in Israel. Their goal is to heighten international awareness as to the requirement, according to Jewish Law, for Israeli to maintain control over the entire area of the Holy Land, and they seek, as well, to change the attitude of the world community to the events occurring in the Holy Land.
This week, the Rabbis met with Mr. David Quarrey, the British Ambassador to Israel, and presented him with the Jewish legal approach to the status of the “territories” as well as an official ruling, signed by the majority of Israeli’s leading Rabbis, that states that the concept of “two states for two peoples” is illegitimate in the eyes of Jewish Law, and unacceptable to every Israeli Rabbi and legal authority, inasmuch as it seeks to legalize a form of national suicide.
Mrs. Quarrey related that he had previously heard about the Rabbinical Congress and read about its work, as well as the Jewish legal position that they promulgate. He expressed great interest in hearing the authoritative Jewish approach to resolving the Israeli-Palestinian conflict, and the Rabbis of the Congress explained to him at length how it is precisely through a strong and unyielding position, as Jewish law dictates, that peace and regional development could eventually sprout forth – not only to Israel, but to their Arab neighbors, as well.
Rabbi Yermiyahu Cohen, a Chief Rabbinical Court Justice Emeritus of France and Belgium, and today, a Rabbinic judge in Jerusalem and a leading member of the RCP, presented historical evidence and findings dating back almost 2500 years of a Jewish presence in the Holy Land. “In light of this evidence, how is it possible to speak of ‘two lands for two peoples’?” he stated. “There is not an archeological dig in Israel that does not validate the eternal presence of the Jewish people in this land.”
Rabbi Yosef Garlitzky, head of the RCP and Rabbi of Central Tel Aviv, explained to the British Ambassador, that the primary goal of the RCP is to change the direction and approach of current “peace talks,” so that instead of focusing on “how much is Israel willing to give up for the sake of peace,” the country should take a firm stance, as required by Jewish Law for hundreds of years, and rejects any and all concessions, which will lead only to war and further bloodshed. If peace is to be achieved between Jews and Arabs, Israel must stand strong and not participate in any negotiations that question they ownership over the entirety of the Land of Israel
Rabbi Avraham Schreiber, past Rabbi of Gush Katif and current Rabbi of the Shevi Darom settlement, was also present at the meeting. He described to Ambassador Quarrey how an “incendiary kite” landed near his home only a week ago and explained how the vast amount of terrorist activities perpetrated by the Arabs began precisely after Israel conceded land to its enemies, whereas beforehand, Jewish residents of Gush Katif maintained amiable relations with their Arab neighbors.
Rabbi Avraham S. Lewin, General Secretary of the Rabbinic Congress, requested of Mr. Quarrey to convey the position of Jewish Law to British policy makers. “The British Commonwealth has had, for years, the merit of supporting the State of Israel. It would be a great pity to lose this merit due to faulty foreign policy.” Rabbi Lewin concluded: “By adopting the rational position of Jewish Law, England can change the direction of international dialogue regarding this most important subject 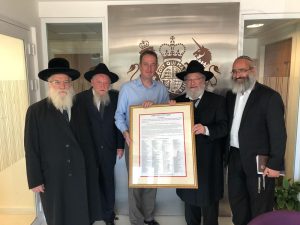