Hundreds of Rabbis Declare: The current Israeli government must be brought down, to save the lives of countless Jews!
————————————————————————————————————
TEL AVIV – The Rabbinical Congress “Pikuach Nefesh,” composed of 420 leading Torah scholars, religious judges, and local and municipal rabbis across Israel recently assembled for an emergency meeting, in light of the horrific rise of terrorist attacks around the country, to cry out on behalf of the Jewish people.
The rabbis of the Congress decided that they would send their official, halachically-based opinion to all current government representatives and members of Knesset, informing them that according to irrefutable rabbinic opinion, every day that the current administration continues to operate in its current fashion, it endangers the very existence of the Jewish people, and that it is a halachic mandate upon every person to do all that they can to bring the present government down.
“The very existence of a government that relies on the votes of Arab parties, which themselves support terror, only encourages terrorists more to carry out attacks and murder innocent citizens. This fact is not only clear from the Torah, but is obvious to anyone who cares to see the truth; that our enemies are raising their heads and brazenly attacking Jews in every corner of Israel, without fear of repercussion,” the rabbis of the Congress declared.
“Furthermore, even without the ‘partnership’ of United Arab List, the simple existence of a government whose coalition members support the return of Jewish land to our enemies creates a powerful incentive for Arab terrorism. This is stated explicitly in the Code of Jewish Law (Orah Chaim 329), that the mere discussion of transferring Jewish land to non-Jews creates an extremely dangerous situation. In the language of the Codes: ‘It makes the land easy to conquer by our enemies.’”
The honorable Rabbi Avraham Yaakov Schreiber, former rabbi of the Gush Katif community, remarked that beyond the necessity to “turn from evil” (Psalms 34:15) – that is, to change the current government – we must also “do good.” In these days, we should learn from the behavior of Rabbi Akiva and Rabbi Shimon bar Yochai, who proudly displayed their Jewish faith and values, with no concern for any negative reaction from the non-Jewish nations. So too, we must strengthen our love for all our fellow Jews and draw them close to the entire Torah, the entire Jewish people, and the entire Land of Israel, without relinquishing a single element.
Rabbi Avraham S. Lewin, Secretary General of the Rabbinical Congress “Pikuach Nefesh,” pointed out that dozens of new rabbis have recently added their signature to the famous halachic ruling of the Congress, which forbids all negotiations concerning the relinquishing of Jewish territories. “This is something unique in the history of Judaism, that so many rabbis, from so many different groups and factions have unanimously signed on the same halachic ruling. When it comes to saving Jewish lives, there is no disagreement among us. Every person who cares about the safety of Jewish lives in Israel should exert maximum effort to bring about the fall of the current government and the establishment of government that will act according to the Torah’s principles.
“It is not a question of whether the government is left wing or right wing. Rabbis should not be aligned with political parties. Rather, the role of a rabbi is to proclaim G-d’s word, through the halacha. Thus, when they see that a ruling government is making decisions that endanger Jewish lives, they are obligated to protest. We protested no less emphatically for decisions made during the Netanyahu government. Our people’s lives take precedence over everything, for we uphold the Torah of life, which protects the lives of the Jewish nation, Lewin said.” 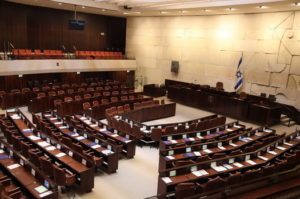