TEL AVIV -The Rabbinical Congress for Peace composed of over 400 leading rabbis in Israel and the United States has launched an information campaign against the actions of the Bennet government. “The rabbis can clearly see the direction this deceiving government is taking, in reviving the status of our enemy, Abu Mazen, and rekindling the hopes of his terrorist regime in Ramallah and Gaza,” said Congress director, Rabbi Avraham S. Lewin. “The remarks and on-the-ground actions of Defense Minister Ganz and the other government officials leave no room for doubt – this government is going down the unfortunate road of the Oslo Accords.”
“We heard the Defense Minister’s announcement in the media that ‘the establishment of a Palestinian state is of vital interest to the State of Israel,’ and we can only wonder if this is an expression of stupidity, blindness or sheer malice,” said Rabbi Yosef Gerlitzky, rabbi of Central Tel Aviv and chairman of the Congress. “The establishment of a Palestinian state is in the vital interest of every terrorist, whose goal is to murder Israeli children. As for the people of Israel, it is an existential danger. Anyone who has lived here in the last thirty years knows exactly what will happen after such a declaration – the same thing that has happened following every concession and Israeli act of surrender – we will face another wave of terror and bloodshed.”
Rabbi Avraham Schreiber, rabbi of the Yishuv “Shevi Darom,” for Gush Katif deportees, remarked that, based on his familiarity with the situation, Defense Minister Ganz actions over the past month have contributed to the de facto the establishment of a Palestinian state.” Ganz is working hard to support Palestinian construction and freeze Jewish building. He is strengthening Palestinian centers of power and transferring control into their hands. He is leading us to destruction, with full awareness, and with the approval of Bennett, Kahana and Shaked – to the obvious delight of the Israeli-hating Arabs who sit in our government. Unfortunately, many in the right-wing camp do not understand the situation. We have to open their eyes and rouse them from their slumber.”
The rabbis of the Congress made it clear that their position has nothing to do with the political situation or the ruling government parties. “We also protested Netanyahu’s actions, when he spoke about agreeing to the establishment of a Palestinian state, and we called on him to resign. The position of the Torah is clear and unshakable. The Code of Jewish Law (O.Ch. 329) rules that any discussion of relinquishing territory under Israeli control only strengthens the hand of our enemies and encourages them to harm Jews, in order to achieve further concessions. As the halakhah states, “At that point, the land will be easy for them to conquer.” We already paid too much precious Jewish blood in the past, due to mistakes of the Israeli government, who failed to heed the warnings of halakhah.”
The rabbis announced the launching of a campaign to awaken Israeli citizens to the danger posed by the current administration, so that “during the High Holy Days, the people of Israel can pray for the abolition of this dangerous government, which is offering concessions that strengthen the hand of our enemies. There is only one way to protect the Jewish people and the Land of Israel, as we all know well, and that is the path set forth in Jewish Law. That alone can bring true and lasting peace. 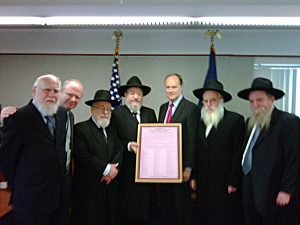